Seventy cases of bovine species slaughtered at Hamadan abattoire (Hamadan is a city located at the western part of Iran) were studied for the frequency of sarcocystosis of the muscles. Samples were taken from the heart, esophagus and diaphragm examined, using histopathological and enzyme digestion methods. By enzyme digestion method, hundred percent of the speciemens was positive for sarcocystosis. Fourthy three cases out of 70 cases examined histopathologically. Fourthy two cases were positive for the parasitic cysts. Presence of cysts in a single, two or three organs, were 28.6% (12 of 42), 33.3% (14 of 42) and 38.1 (16 of 42) respectively. The number of cysts in histopathological sections of hearts, esophagus and diaphragm stained by hematoxyline and eosine stainings method were 4.7±0.94 (mean±se), 107±0.32 and 106±0.41 respectively. There was a significant differences, between number of cysts in the heart and number of the cysts in the esophagus or diaphragm (P<0.01), but there was no significant differences, between the number of cysts in esophagus and diaphragm. Based on the thickness and morphology of the cyst wall, there were, three types of cysts identified, cysts with thin wall (Probably, S. cruzi or S. bovicanis, cysts with thick homogenous wall (probably S., bovifelis or S. hirsuta) and cysts with thick straited wall (probably S. bovihominis). In 4 cases out of 42, there were present of parasitic cysts in the purkinje cells of the heart, and in four cases out of 42, the presence of the cysts were associated with lymphocytic infiltration among muscle fibers of the myocardium. The protozoan organism in intermediate host, may cause fever, abortion, weight loss, hair loss, fatal encephalitis, inflammatory reactions of the heart and skeletal muscles and vasculatures, and sudden death of the animals with sarcocytosis. Even in the abscence of pathological phenomenon including necrosis or inflammatory reactions, the cyst itself may cause a decrease in animal performances. In the definite host, including in human beings, the organism may cause a gastrointestinal distorbanses. Since, the cyst of the sarcocystis is containing a toxine called sarcotoxine, consumption of muscle containing sarcocystis by human being may cause gastrointestinal manifestations. Because, sarcocystis microorganism is ubiquitous and causes clinical disease in human beings and different specises of animal, as difinite or inter mediate host, it is necessary to study comprehensively different aspects of the sarcocystosis in Iran. 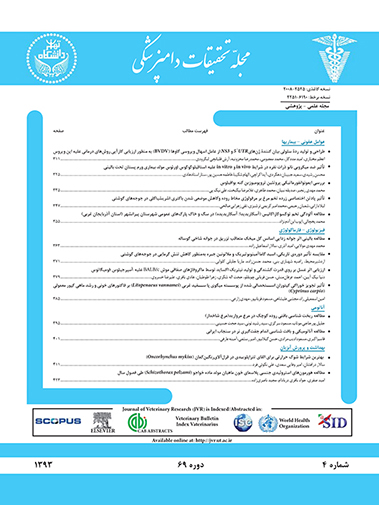